The Stakes of “Diversity” in Higher Education Today 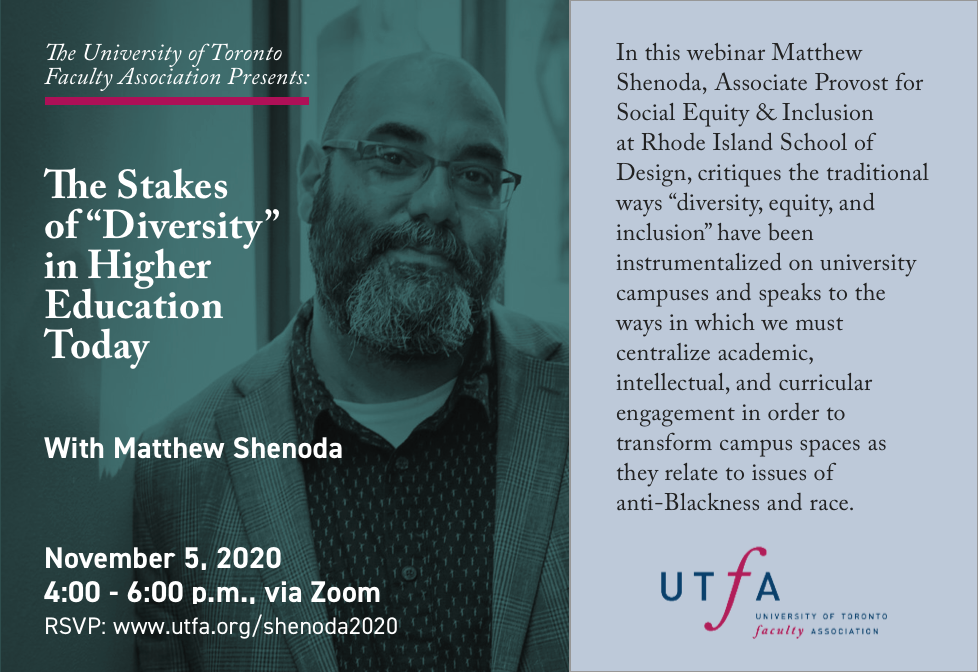 It is our pleasure to announce that Professor Matthew Shenoda will deliver a lecture titled “The Stakes of “Diversity” in Higher Education Today” via Zoom on Thursday, November 5, 2020 at 4 p.m.

In this webinar Professor Shenoda, Associate Provost for Social Equity & Inclusion at Rhode Island School of Design, critiques the traditional ways “diversity, equity, and inclusion” have been instrumentalized on university campuses and speaks to the ways in which we must centralize academic, intellectual, and curricular engagement in order to transform campus spaces as they relate to issues of anti-Blackness and race.

Matthew Shenoda is a writer, professor, university administrator, and author and editor of several books.  His poems and essays have appeared in a variety of newspapers, journals, radio programs and anthologies. His debut collection of poems, Somewhere Else (Coffee House Press), was named one of 2005's debut books of the year by Poets & Writers Magazine and was winner of a 2006 American Book Award. He is also the author of Seasons of Lotus, Seasons of Bone (BOA Editions Ltd.), editor of Duppy Conqueror: New & Selected Poems by Kwame Dawes, and most recently author of Tahrir Suite: Poems (TriQuarterly Books/Northwestern University Press), winner of the 2015 Arab American Book Award and with Kwame Dawes editor of Bearden’s Odyssey: Poets Respond to the Art of Romare Bearden (TriQuarterly Books/Northwestern University Press, 2017).

Shenoda began his teaching career in the College of Ethnic Studies at San Francisco State University where he taught for nearly a decade and has held several faculty and administrative positions at various institutions. Formerly the Assistant Provost for Equity and Diversity at CalArts where he was also faculty in the School of Critical Studies and the Dean of Academic Diversity, Equity, and Inclusion at Columbia College Chicago where he was Professor of English and Creative Writing, he is currently the Associate Provost for Social Equity & Inclusion and Professor of Literary Arts and Studies at Rhode Island School of Design (RISD) where he directs the Center for Social Equity and Inclusion. Additionally, Shenoda is a founding editor of the African Poetry Book Fund.